These blue ribbon biscuits – made with buttermilk, butter, coconut oil, and baking powder – are based on a State Fair of Texas winning recipe. (Hey there Big Tex). Bake these and you’ll see how easy great biscuits are to make. 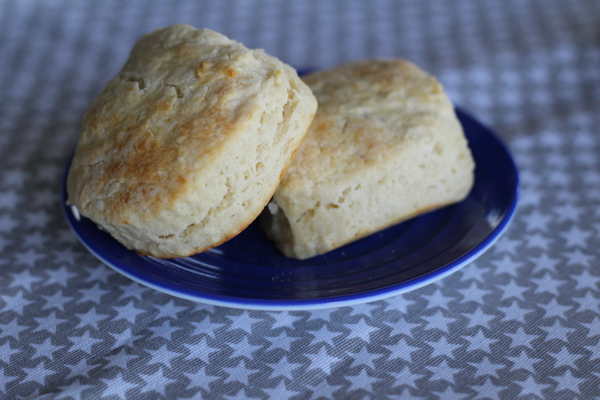 Back in 2015, Krysabelle Gilbert of Lindale, Texas made these blue ribbon biscuits and won “best of show.” She called them “Butter ’em up Biscuits” and they won out of 27 entries in her division. Nice work!

Baked goods that year, as always, were a popular competition category. (You may recall the Lemon Chess Pie from 2015; also yum). It was a big year. Check out what was entered at the State Fair of Texas that year overall. These were all made at home by amateur bakers, aka hobby bakers, people who don’t earn a living baking.

Whew! That is a lot of baking! It is also so inspiring.

Whenever I make home-made biscuits, from scratch, I ask myself, “why don’t I make these more often?!” So, when I had leftover buttermilk from another recipe, I dug out this blue ribbon biscuit recipe, a classic. With just 7 ingredients, all staples in my pantry, and 40 minutes to spare, it was game on.

I greased the pan with butter and measured out my portion for the dough. Then I realized I didn’t have any shortening on hand. (So much for a stacked pantry…) No worries though. I love baking with coconut oil and had plenty of that. I simply replaced the shortening with the same amount of coconut oil.

Overall, I ended up increasing the butter and coconut oil “shortening” amounts from  Krysabelle’s version. After combining those two ingredients into the dry ingredients (flour, baking powder, salt and sugar), I added the buttermilk and egg.  I mixed it just until it was combined. That was something Krysabelle emphasized. Don’t overmix. If you want a tender fluffy biscuit, just follow that rule. Other than that, biscuit dough is hard to mess it up. I like that in a recipe.

Anyway, within 15 minutes, my biscuits were ready for the oven. 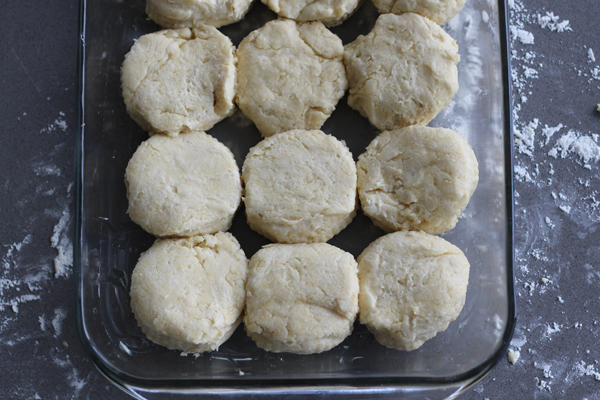 When they came out, 13 minutes later, they smelled and looked amazing. I let them sit a couple minutes. Then, with oversize spatulas, I moved the entire batch out of the pan and onto a wire rack. I waited a long 5 or so minutes, then smothered one with jam to eat. Delicious! 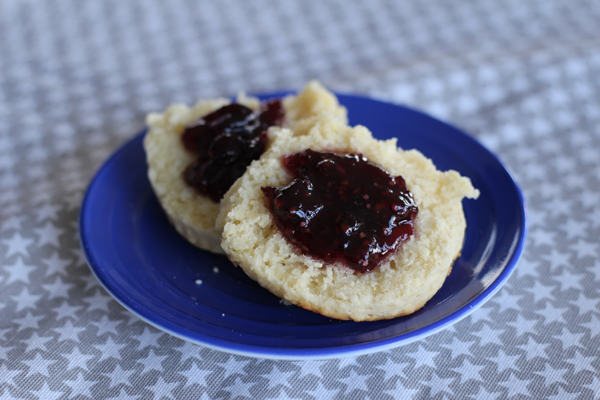 I hope you try your hand at these soon too.

Preheat oven to 450 degrees F. Spread thin layer of butter on bottom and sides of 9×13-inch baking pan; set aside. In a large bowl, whisk together 3 cups flour with salt, sugar, and baking powder. Cut in the 1/3 cup each of butter and coconut oil until crumbly. In a small bowl, whisk together buttermilk and egg. Pour into flour mixture. Mix until dough is barely combined. Don’t over-mix. Turn dough onto a floured surface. Knead just enough to form a thick rectangle of dough, patting to about 1-inch thick. Cut into 12 biscuits with a 2 to 3-inch biscuit cutter. Place on a greased baking sheet (touching each other). Turn each over once (butter up). Bake 12-15 minutes or until golden brown. Makes 12.